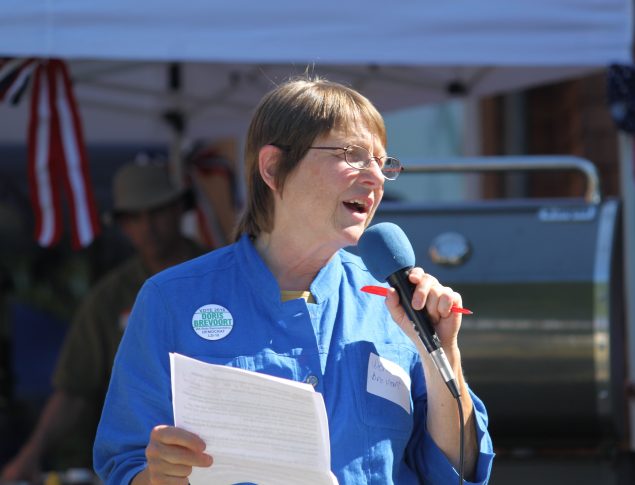 Both candidates running for the State Legislature to represent the 10th Legislative District (Position 2) spoke to the South Whidbey Record, a nearly 100-year-old newspaper that serves the south end of Whidbey Island.

Doris Brevoort highlighted a number of areas where her views differ from that of her opponent, the incumbent Republican Dave Hayes.

On funding of education, Doris suggests that tax reform is the solution. As opposed to Hayes, she supports a graduated capital gains tax and the closure of corporate tax loopholes. She said she would have supported a bipartisan bill to end school districts’ dependency on local taxes; Hayes voted against it. She also argues that the state is going to have to take a hard look at trading regressive sales taxes for a stable income tax sometime in the future.

On land-use issues, where Hayes believes in deregulation, Doris looks for smarter solutions. She was involved in an “urban village” program in Seattle and she believes smart design that allows more density — without foregoing quality of life — could be key. The state could encourage such intelligent design with things like block grants and policies. “An overall housing development plan in state is needed,” she told the newspaper.

On gun control, where Hayes has a record of toeing the NRA line, Brevoort said she doesn’t support outlawing guns altogether, but she’s in favor of limits on assault rifles and believes in licensing gun owners.